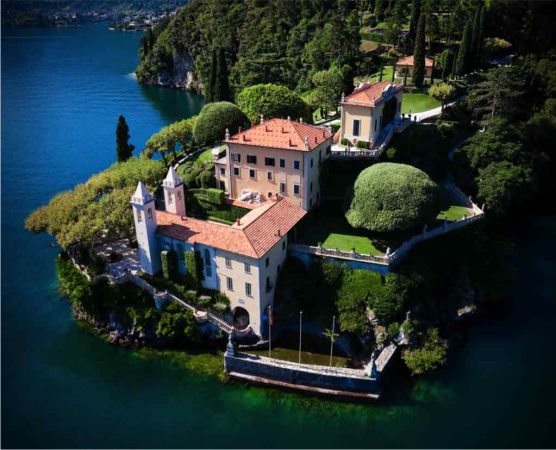 Located on the western shore of Lake Como, the splendid 18th century Villa del Balbianello is perched on the point of the Dosso di Lavedo, a wooded promontory that juts out from the coastline to form a small peninsula.

Villa del Balbianello was commissioned by Cardinal Angelo Maria Durini towards the end of the eighteenth century and built on the remains of a thirteenth-century Franciscan Monastery. A magnificent Loggia crowns the main building from the highest point of the promontory, letting the viewer simultaneously enjoy two different panoramas of the Lake.

Following many years of neglect, in 1919 the Villa was purchased by an American general, Butler Ames, who restored it scrupulously. Twenty years after his death, in 1974, his heirs sold the property to an entrepreneur, Count Guido Monzino, who doubled as an explorer and ardent mountaineer. Count Monzino had the Villa completely re-decorated, adding important pieces of English and French antique furniture from the eighteenth and nineteenth centuries, Oriental carpets, Beauvais tapestries and French boiseries. It was Monzino himself who left the Villa, along with most of the Dosso di Lavedo, to FAI, which has been managing it with attention and care since 1988, providing the periodic maintenance it requires.
Villa del Balbianello is the most visited among the 52 FAI properties with over 90,000 visitors in 2015.

Almost 70% of these visitors are foreigners coming from all over the world; they appreciate the outstanding beauty of the Villa, the location and the breath-taking surroundings. The Villa was also the setting of several notable films, including A Month by the Lake by John Irvin, Star Wars: Episode II and 007 Casino Royale.

The restoration project – Visitor experience and safety as a priority
Villa del Balbianello has until now undergone a series of renovations that have allowed the Villa to remain functional and aesthetically appealing to the large public that comes to enjoy it every year. Today, FAI’s main priority is to complete projects aimed at improving the visitor’s experience, while also upgrading the Villa’s technical systems in order to conform to safety requirements as well as FAI’s new policy of sustainability.

One of the most critical aspects of the project will involve the restoration and consolidation of the Villa’s jetty for a safer  and more pleasant experience when docking visitor boats.
The project will also include a special maintenance program for the garden and its centuries-old trees, as  well as the foundation of the garden paths. New signage will also be installed throughout the Villa and garden to increase awareness of Villa del Balbianello’s important historic features as well as FAI’s mission and work.

Improvements to the Villa’s safety measures will include the implementation of new security, emergency lighting and fire prevention systems. As part of the project, the property’s old diesel fuel system will be replaced with a modern heating system, which will assure proper temperature control to better preserve the Villa’s collection and furniture.

In order to further improve the visitor experience, additional renovations will be made to the villa’s facilities, including new bathrooms and drainage systems, and improvements to the bookshop and ticket office space.

Friends of FAI has committed to restoring Villa del Balbianello for its 2016 restoration project.