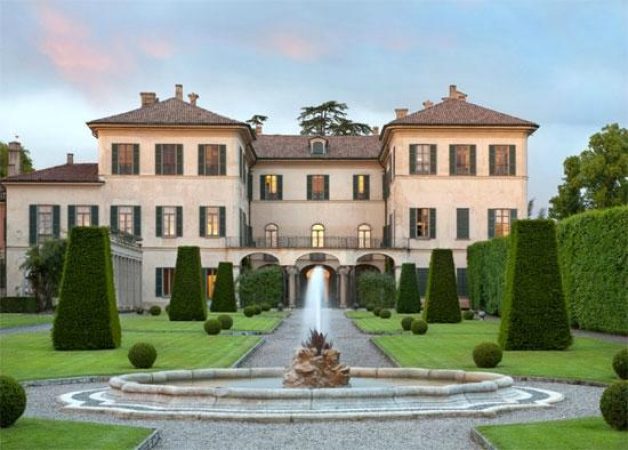 Surrounded by a magnificent Italian-style garden, the 18th century Villa Panza in Varese is famous around the world for the contemporary art collection that Giuseppe Panza di Biumo assembled there from the 1950s onwards.

Immersed in delightful 19th- century grounds, Villa Menafoglio Litta Panza looks out across the city of Varese from the hill of Biumo Superiore. The residence was built in the mid-18th century on the site of an existing “noble mansion” at the behest of Marquis Paolo Antonio Menafoglio.

Upon his death in 1823, the property passed to Duke Pompeo Litta Visconti Arese, a descendant of one of the most illustrious Milanese families and the man responsible for commissioning the new works entrusted to neoclassical architect Luigi Canonica (1764-1844). Canonica was behind the construction of the new stateroom on the ground floor, the creation of the wing housing the outbuildings and stables, and the new picturesque layout of the grounds.

After a period of neglect, in 1935 the complex at Biumo was acquired by Count Ernesto Panza di Biumo, who commissioned the villa’s restoration to noted architect Piero Portaluppi. The villa was extended with a new courtyard and the 33,000 square meter park was entirely redesigned in the English style with two extraordinary formal flower gardens, a lake, and a classical temple. Ernesto’s son Giuseppe would go on to amass an exceptionally important collection of American contemporary art, a portion of which is still on view at the villa. In 1996, Giuseppe Panza and his wife donated Villa Panza to FAI; their wish was to preserve not just their home but also the vast art collection it contained in order to make it available to the public and maintain it for future generations. After a thorough restoration, Villa and Collezione Panza was opened to the public in September 2000, in the presence of former Italian President, Carlo Azeglio Ciampi.

In the 1970s, Giuseppe Panza emptied, cleaned and repainted the old stables, carriage depots, garden tools and warehouses in order to host art installations designed specifically for these areas. FAI’s project aims at transforming the old carriage depots, which are located under the portico, into new exhibition spaces. The carriage depots are currently used for storage. The project will also involve restoring and reopening the Villa’s 17th century chapel.

Friends of FAI selected Villa Panza for its 2015 restoration project and has raised $525,000 in order to fund:

– The restoration and reinforcement of the floors, walls and entryways in the new exhibition spaces;
– Creation of a technical room for the heating, cooling & humidification/dehumidification systems;
– Restoration of the 17th century chapel;
– A video projection of the documentary on the life and collection of Giuseppe Panzadi Biumo.

THANKS:
Friends of FAI is deeply grateful to our donors for enabling us to provide the largest single grant in our history to this special project.